Medallion of Zulu - Glint of Hope 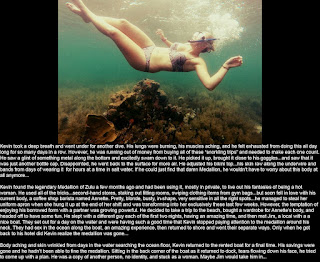 - Have a Request? - Great, I love requests! Send an email with the details to rickjbennett85@gmail.com and I'll do my best to fulfill it! All requests must be age 18+ and I prefer not to do anything with celebrities.
- Issue with an Image? - Please let me know right away via comment or email. I'll remove the offending image at once. I do not claim ownership over any of the base images.
- Great Shift - 95% of the world's population suddenly finds themselves permanently shifted into different, random bodies. After three days, it is declared irreversible and people must return to their lives in very different bodies.
- Swap Clinic - A technologically advanced medical service that can switch body parts and even entire bodies between two people. Some swap for money, permanently giving up positive qualities to wealthy bidders. Some swap temporarily, simply for the experience of living life as someone else. Some are forced to swap as a form of punishment by judicial systems around the world.
- Good Gurls Rehab - Using Swap Clinic technology, GG Rehab swaps troubled, disruptive boys into productive young women. Some are taken to the clinic by their parents. Others are forced to attend after getting in trouble with the law. A few even volunteer in exchange for college tuition. Recidivism rates of their patients drop to below 5%. "Reconditioning" is performed on those who must return, and no one has ever had to undergo reconditioning twice... The length of their sentence as a woman ranges from a single year for light crimes to a lifetime for more severe offenses. Check out the brochure!
- Bikini Beach - An island resort that uses Swap Clinic technology to randomly switch visitors into different bodies for a vacation away, even from themselves.
- Role Exchanger - A mysterious orb of blue light flits around the Earth, swapping traits between people it gets near. Traits range from the physical - age, appearance, sex - to the mental - intelligence, knowledge, sexual preferences. There is no known way to reverse the changes, leaving victims to adapt to their new selves.
- Medallion of Zulu - A legendary medallion which allows its wearer to transform into a copy of another person using an article of their clothing. Seems to have a mind of its own, with a habit of abandoning its owner at the worst times...
- Ring of Turan - A magical artifact which allows its wearer to become a gender flipped version of themselves for as long as they wear it. However, should the wearer become pregnant, the ring will disappear to find a new master. Other side effects are known to include an increased sex drive, tendency toward bisexuality regardless of starting orientation, and a desire to remain in their “flipped” form that grows the longer the ring is worn...
- Idol of Ianus - An ancient magical statuette, when two people hold it at the same time, they switch bodies. However, there is a 48 hour cooldown before it can be used again, after which they only have one hour to switch back. If they fail to do so, the idol disappears to find a new owner, leaving them stuck as each other forever!