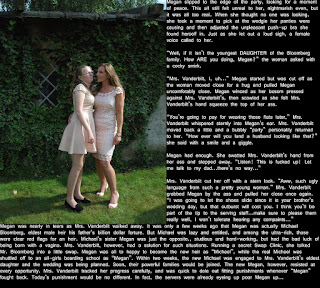 - Have a Request? - Great, I love requests! Send an email with the details to rickjbennett85@gmail.com and I'll do my best to fulfill it!
- Great Shift - 95% of the world's population suddenly finds themselves permanently shifted into different, random bodies. After three days, it is declared irreversible and people must return to their lives in very different bodies.
- Swap Clinic - A technologically advanced medical service that can switch body parts and even entire bodies between two people. Some swap for money, permanently giving up positive qualities to wealthy bidders. Some swap temporarily, simply for the experience of living life as someone else. Some are forced to swap as a form of punishment by judicial systems around the world.
- Good Gurls Rehab - Using Swap Clinic technology, GG Rehab swaps troubled, disruptive boys into productive young women. Some are taken to the clinic by their parents. Others are forced to attend after getting in trouble with the law. A few even volunteer in exchange for college tuition. Recidivism rates of their patients drop to below 5%. "Reconditioning" is performed on those who must return, and no one has ever had to undergo reconditioning twice... The length of their sentence as a woman ranges from a single year for light crimes to a lifetime for more severe offenses.
- Bikini Beach - An island resort that uses Swap Clinic technology to randomly switch visitors into different bodies for a vacation away, even from themselves.
- Role Exchanger - A mysterious orb of blue light flits around the Earth, swapping traits between people it gets near. Traits range from the physical - age, appearance, sex - to the mental - intelligence, knowledge, sexual preferences. There is no known way to reverse the changes, leaving victims to adapt to their new selves.